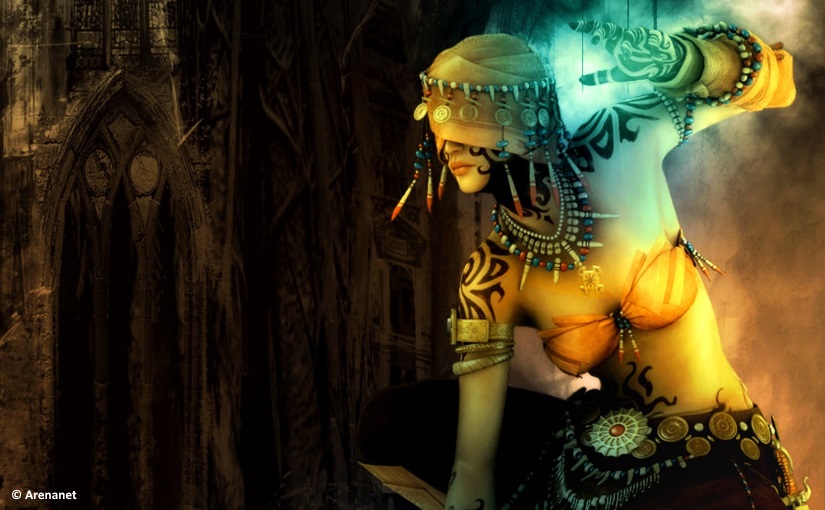 It could be a fatal caveat to the bag of opinions that follows, but, as Rushdie said of Don DeLillo’s magnum opus Underworld, WOW “fills the sky” where MMOs are concerned.  It must be acknowledged, a tip of the hat to the naked emperor from here onwards, as well as a stick to beat me with if I generalise incorrectly in what follows.  Check this out from Andy Gavin for a thorough look at WOW.

As a long-time Ultima Online (UO) player, a dabbler in Dark Age of Camelot (DAOC) and eventually an officer and raid leader in a Lord of the Rings Online (LOTRO) guild, it became increasingly apparent to me during my time with the game that while Guild Wars (GW) borrowed from its peers, its innovations influenced games like WoW and LOTRO.    Its strengths persist in games that aren’t even MMOs, such as League of Legends (LOL).  My admiration’s grown over time to the extent that I wanted to spend a few lunch hours telling both the world (due to this blog) and nobody in particular (due to its current number of followers) just why it was a truly great MMO….

I never got this obsession with the open-worldness of an MMO.

“You can ride seamlessly across whole continents”, “you can meet up with anyone and just have an adventure without loading screens,” and so on.  In reality, as MMO’ers reading this will have guessed, this means you’re just stood in queues waiting for monsters to spawn so you can kill them.  Now this isn’t so bad if Farmer Giles is giving you ten copper coins to rid his farm of shrews, (collectively ignoring their , er, breeding rate that was beyond the dream of geneticists).  But, to stand in a room the size of a restaurant with about one hundred assorted heroes each given a quest to snuff out some wight threatening to tip the balance of the War of the Ring, chatting and emoting away till the pitiful thing spawned, rendered even the most atmospheric quest dialogue barren and meaningless.  And anyway, just how many gifts of armour does our quest-giver have, to reward all one hundred of us?

(Actually, with apologies for the digression, just how do all the guys handing out the epic armour pieces for the hard earned tokens killing dragons and balrogs in raids get that armour anyway?  Is there some warehouse where the Rangers, Elrond and other worthies place bulk orders from?  Could we not just go straight to the factory shop?)

While we want to achieve our goals with other real players co-operatively as part of the narratives constructed for us in the player vs environment (pve) content of these games, the quests we are given are meant to put us at the heart of the action; we change the world, we are rewarded and lauded, applauded and feted by the great and good, the poor and the disposessed, from Bree to Ascalon.  We are supposedly making a difference, but we are surrounded by groups of other players on duplicate quests.

What would the Dark Knight make of his first fight with Bane if he rocked up to see forty five other Dark Knights waiting their turn on Bane to ‘turn in that quest’?

GW rescued us.  It gave us instances.  The towns were effectively hubs where you sought groups, picked up quests and socialised.  When you left town you were given an instance to adventure in, the wild places between that outpost of civilisation and the next one.  In this instance you could quest with up to seven other people.  Knowing this was the limit meant the developers could put more oomph into the environment (which was usually beautiful) and shape it for the narrative to come.   And they had, even if they didn’t really choose to exercise, more flexibility in how that particular narrative could play out, rest assured that no armies steamed in to kill the cackling bad guy just as you were about to defend the realm.

When you reached the end of that instance you realise you experienced something like a proper RPG quest; you were at the centre of the story with your buddies, defying the odds, making the difference as though you guys were the only ones in the world making that difference.

Raids in the other games mentioned were, of necessity, instances, but GW put every quest you did in spaces tailored to suit.  I don’t think it’s a coincidence that LOTRO subsequently put huge swathes of its co-op content inside instances, offering both flexible numbers and difficulty settings, which I’ll return to in a forthcoming post.

Let’s face it, anyone who’s played an MMO has thought about levelling up a second/third character and sagged to think of just how much grind is involved.  ‘Grind’ is a term to describe how the designers created game mechanics that made it take a long time to gain levels and experience for no other reason than to keep you playing for longer.  This is tied into the subscription model, of which more later, but it obviously makes sense if you wish your players to keep paying you month after month.

GW said to us ‘sod that, let’s just have twenty levels to teach you how to play the game (with an appropriately tight narrative PvE structure), then it’s up to you what you do.’

This didn’t seem to stop the millions of players playing, partly because it was easy to fire up new character classes and enjoy them, mostly because the endgame was PvP and it was incredibly well balanced and easy to access.  GW had the sense to keep its ‘grinds’ behind cosmetic upgrades and enhancements.

3. Pay once, enjoy the meritocracy.

“I’m not paying a sub for just twenty levels and one campaign I’ll rinse in a few days!”

“If I put in more effort, I should expect to have a better character!”

“Of course,” said GW, “but to your first comment, you pay once, then you have unlimited access to the servers for as long as the game’s going.  As for your second comment….”

In other MMOs you not only had the pressure of paying a subscription, encouraging you to log in often in order to ensure you got value for money, but they put in ‘the grind’ to keep you levelling (the left jab).   This only set you up for the endgame lotto of the raid grind (the right to the kidney), where you repeated a strict sequence of events, as a group, week in week out in the hope that when you metaphorically emptied the bag of loot from the monster’s waist/guts/ornate wooden chest, you got a pair of gloves with marginally higher statistics than the pair you went in with.

Once you’d got the gloves, helmet, leggings, chest piece, shoulder pieces and boots (a process that usually took months of effort) you unlocked bonuses that would make the next raid in the sequence do-able by someone who wasn’t an ex-Quake pro, repeating the whole process again (the Haymaker to your jaw).

If you could put in more hours, scratch that, if you could grit your teeth to endure this repetition for long enough, you would obtain gear that couldn’t be matched by someone of a similar level who did not indulge in this ‘marginal gain lotto’ with its steep learning curve and requirement of disciplined attendance, in groups, regularly in order to win that lotto….occasionally.

GW knew that the ability to individualise yourself cosmetically is as compelling as ‘maxing’ out your character’s statistics.  We lapped it up then, we lap it up now in LOL, LOTRO and countless other games with dressing rooms, skinning and customisation.  APB‘s troubles were well documented, but one persistent thread through all the fans’ expressions of disappointment was for the character creation kit!

“But GW just had a few armour types and titles and pets!”

Agreed, in this respect it’s been comprehensively bettered since, but who foresaw the value proposition in just twenty levels of PvE content when it entered the ring against the goliath MMOs in the opposite corner? GW took individualisation into its mechanics at least as well as those other games, but more interestingly so.   Instead of, like LOTRO, allowing you access to every skill you’d acquired whenever you wanted it, you could take only eight skills from a huge library at any one time, forcing you to think about and prepare for the encounter ahead (the bun).  Then it tied you into a purely group mechanic, meaning you had to think about your skill choices as part of a greater whole, these having an exponential effect on the efficacy of your team’s ‘skill loadout’ and thus its ability to overcome the challenges before it (the burger).

…yes, PvP against real enemies with proper brains and stuff, that had their own group strengths and weaknesses, thus creating a multiplication of classes and skill combinations that would give Gary Kasparov a migraine, let alone what it must have done to the mental health of the designers and testers at ArenaNet.  They did a sterling job.

Defense of the Ancients (DOTA) and its inordinately successful successor LOL, use the same principle.  In LOL the teams are built out of characters with abilities available to all, varying by class and skills (in the latter represented through item choices within the arena and rune loadouts beforehand).

The result is a constant evolution of strategies and group loadouts to counter and dominate the opposition, a relentless spiral towards the ever receding ideal group, or a snake incessantly devouring its own tail, depending on your attitude to a glass with some water in it.

UO and Eve Online (Eve) offered a sandbox.  You levelled up then you made your own fun.  WOW put its eggs into the PvE, trying to create new narrative content at the greatest rate it could, a model which was followed meekly by all the other persisting major players in the space.  Except GW.

Now what Eve gets right, in spades, is that it knows players will invent their own gameplay, you just need to give them a system to support it.  GW gave you twenty levels to get to grips with it then gave you a superbly balanced, meritocratic and most importantly diverse PvP experience.  You want to drop in for some 4v4 with strangers, it’ll take seconds; see how many maps you can win.  8v8, go ahead, see if you can make it to the Hall of Heroes, where the hardcore guilds were playing for the pride of rank, that ubiquitously compelling mechanic in most ‘pure skill’ online games from shooters to strategy.  And you want hardcore? The guild I was in had its ‘PvP division’, application to which required agreeing to twenty five hours a week practice (to anyone who hasn’t played PvP online who’s managed to get this far…’I shit you not’).

Of course, there was the extra layer of PvE content (The Fissure of Woe) being unlocked in your region if your region’s best PVP guilds were dominating the Hall of Heroes, a mechanic similar to those used by DAOC and its Realm vs Realm combat but adopted by many others since, including LOTRO (both the latter giving PvE ‘boosts’ to players going through the narrative ‘RPG’ content if their PvPers were doing well.)

Aahh Guild Wars.  A game that was built around you playing in groups, playing casually or hard, against monsters or players, winning on merit not grind, with an RPG narrative that felt like your story, told across beautiful landscapes, for a one off price.  I love you.